In the Spotlight: Sifu Bob Rosen

Check out our guest blogger for the day: Sifu Bob Rosen!

It was late Summer of 1976 when I was driving through North Station and noticed the words Kung Fu on a second floor window above the McDonald’s on Causeway Street across from the then Boston Garden. I thought it was a strange location for a Kung Fu school, but nevertheless I decided to park and check it out. I remember walking up the flight of stairs uncertain of what to expect or who might be running this school.

I really didn’t know much about Kung Fu other than what I learned from watching the popular TV series “Kung Fu” with David Carradine, and Bruce Lee’s “Enter the Dragon”. I had been a Karate practitioner learning more about fighting skills than forms or weapons, and I was looking for a new challenge. I found it in Wah Lum Kung Fu.

When I entered the front door there was this Chinese man sitting at a desk drinking coffee and reading the newspaper. (From my vantage point it appeared that he was reading the automobile sale section…..probably how he taught himself to read English!) He greeted me with a simple Hello; I think I bowed awkwardly mimicking Kwai Chang Caine, and ridiculously asked if this was a Kung Fu school. He called to his assistant to come out and talk to me and show me the training hall. When we walked through the beaded doorway I said to myself  “wow, this place is the real deal”. It was about 4000 square feet with a high beamed ceiling, a few weapons racks with things I’d never seen in person, a Kung Fu altar, and the smell of incense and sweat. In today’s terms it was awesome!

After the tour I went back to Master Chan (whose name I still didn’t know until I became a student) and asked about cost and training times. Back then you signed up for a three- month program which included the uniform for $135. Can you believe that? I was told that I had to attend classes five nights a week which didn’t seem unreasonable at the time; can you imagine requiring that today? It took me a month to put that money together but still, after 36 years, it was the best investment I made for myself and a relationship which I cherish highly to this day. 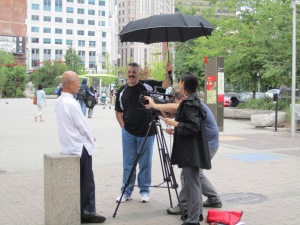 Sifu Bob Rosen protects the camera from rain during production.

One comment on “In the Spotlight: Sifu Bob Rosen”