While in post production (editing) I was averaging 4 hours of sleep. I wanted nothing more than for the project to be finished. After months of editing, I was finally finished. I thought once I finished editing the film, it would be smooth sailing. I thought wrong.

This week I am working on the extended trailer, film festival submissions, press kits, website updates, promotional items, blogging for the film…and still have to keep up with the rest of the Wah Lum world! It is definitely a challenge. I recommend to anyone making an independent movie to have a lot of support, or it could potentially make you insane.

At the end of the day though, it is all worth it. I know that my father’s story will inspire, entertain, and amaze those who watch it. I hope everyone is looking forward to its release.

Today I share a production still of us on set at the Wah Lum Temple in Orlando, Florida. 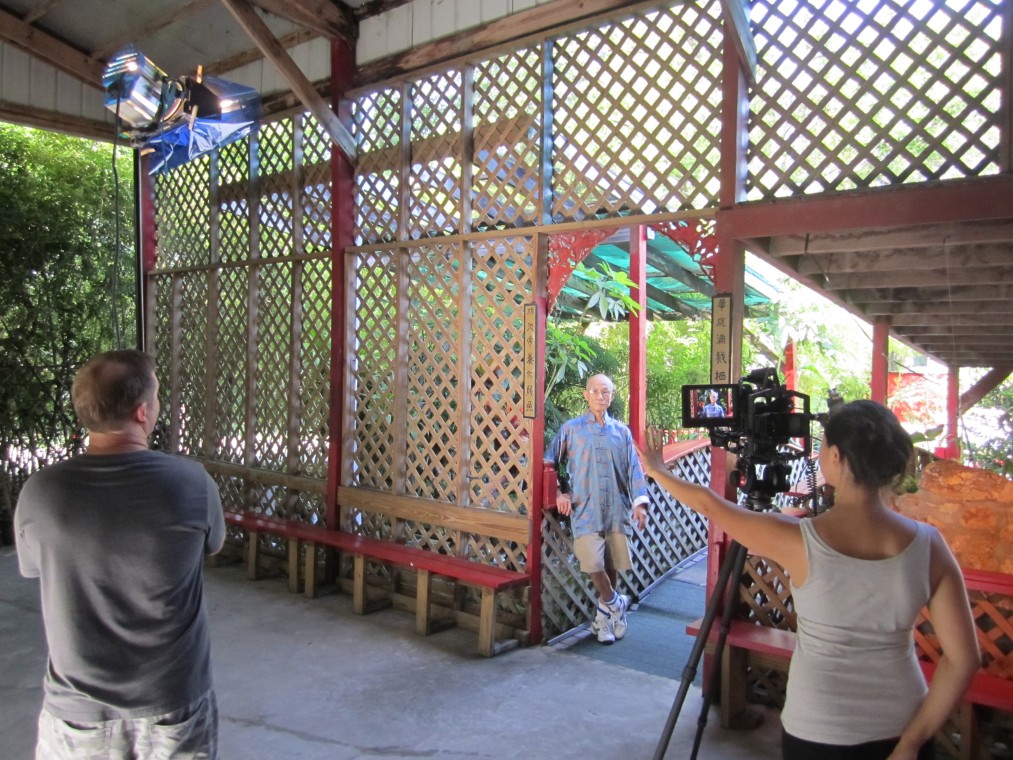 I officially started making this film in 2008.  Gathering the footage was no easy feat, especially with my father as the subject.  He is known for his energy and enthusiasm in everything he does.  While this is evident in the film, these characteristics made it very challenging to capture him on camera.  There were several fun moments of him leaving the interviews especially when we were in China and Hong Kong.  While we were in Boston, people kept walking up and talking to him because they recognized him from 30 years ago!

Those of you who know him, can only imagine us trying to keep him ‘still’.  He was the one take wonder… because that is all I could get!

In the history of the praying mantis style of kung fu, a well-known story is one of the mantis and cicada. Master Wong Long invented the praying mantis style of kung fu after studying the fight between a mantis and cicada. Our style is the Wah Lum (named after the Temple where our ancestor studied) Tam Tui (our ancestor family style of kung fu) Northern Praying Mantis.
During our interview at the Temple, the cicadas started chirping and would not stop. It is as if they were challenging us (the mantis!) We eventually got through the shoot, but not without having to battle a little outdoor nature, and our old opponent, the cicada.

WELCOME TO OUR BLOG

After years, months, days, and hours of work.  I am finally finished with my first official documentary for Wah Lum Films.  I would have liked to update everyone throughout the process, but there was no time while I was in production or post production.

I am excited to have finished a project that is so meaningful to me.  Not only is my father an inspiration to me, but to thousands of others as well.  In this blog, I plan to keep every one informed about screenings, press releases, festivals, dvd releases, and potential ways that you can see this film.  I will also share stories, behind the scenes, and interviews about the film.

The life of my father is not just about Kung fu, it is about the journey of an incredible man and his dreams.  His  story will amaze any one who watches it.  At first,  I was reluctant to share so much of my father with the world, but I realized that he has already helped so many people, and with this documentray he can inspire millions more .  I want to share this gift with everyone, so look forward to my first official documentary… Pui Chan: Kung Fu Pioneer